Amazon Orders again not showing up at POS

The following Amazon orders from yesterday still have not arrived at our POS nor have we received a Nitrosell web order email about them. Our normal web site order emails are fine.

Can you review your configuration here to make sure it’s correct, please?

Am I right in understanding that you don’t use the ‘Order fulfillment at POS’ option because you use ShipWorks?

Yes, that is correct.

Okay, thanks. I think this delay may have been our fault. We’ve been testing an update to the order handling side of the integration to commit quantities from orders that aren’t yet ready for download, using what Amazon calls the Actionable Orders Report.

It seems we inadvertently delayed order downloads since yesterday due to a bug in this test functionality. Frankly, it should not have affected your live store and I apologise for that.

The good news is that it’s ready to be released and will be tomorrow. It adds a new column to the reports called ‘Qty Committed’, which is taken from individual quantities for each SKU in the ‘Actionable Orders Report’ for orders that have yet to be downloaded by the store.

One of the quirks in Amazon’s Orders API is that, according to the MWS API support team, data is often available quicker to the Reports API. By using this Actionable Orders Report, we should get the committed quantities into the webstore quicker than if we were waiting for the orders to actually download via the Orders API. (Why is true is mysterious to say the least, but empirical evidence bears it out.)

Once we have updated the committed quantities from the Actionable Orders Report, we then immediately re-sync the data feeds, so the Inventory feed will get re-uploaded with that quantity subtracted.

We also take into account whether an order has been cancelled and doesn’t ultimately become available for download – in that case, we discard the committed quantity and reset it to where it was before the ‘unshippable’ order was placed.

The only gap in the process is the in-store quantities: there are currently no way for us to commit additional item quantities in-store without pushing down a web order. So there is still a possibility of an item selling out in store before the order gets downloaded from Amazon.

We hope to address this deficiency in future. However, for now, we believe this update will greatly enhance the accuracy of the quantities being uploaded to Amazon, especially where there is a lengthy delay in Amazon making an order available for us to download.

We’ll let you know as soon as it’s released. Sorry for the inconvenience regarding the orders that failed to download.

The processing of the Actionable Orders Report is now in place and working. This should ensure more accurate quantities on Amazon, especially where they haven’t yet made an order available for download.

You can see a new column on the reports page: Qty Committed.

We welcome your feedback.

Quick update: the Actionable Orders Report is now available on your WSM:

It shows both orders that have already been downloaded, as well as those in the report from Amazon that have yet to be made available for download.

Please let us know if you have any questions.

One last update, Bob! You can now also filter the Reports page by enabling the ‘Show only items with committed quantities’ option: 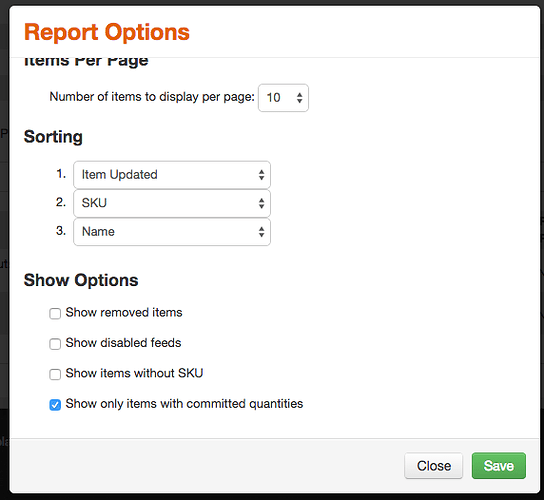 So you can see all the items that need to be reserved at a glance.

Thanks for the input on this. I do see everything except the last item where I can filter the report to show only items with committed qtys. I don’t have that option

My guess is that the old JavaScript is cached in your browser. Could you try a hard refresh, please? Ctrl+F5.

I see it was already checked off. Thanks again.